skip to main | skip to sidebar

Name: Northwest History; Explorations in digital history in the Pacific Northwest--and beyond.
Address: http://northwesthistory.blogspot.com/
Who: The author is Larry Cebula. He is a Public Historian at Eastern Washington University and Assistant Digital Archivist at the Washington State Digital Archives.
What: You don't need to be a northwest history aficionado to find the blog interesting! Larry Cebula began blogging in May 2007. In his regular posts, the authors explores the intersections of public and digital history. He focuses on the Inland Northwest but also ventures further afield on occasion. Cebula's posts are very diversified, as he includes and writes about videos, pictures, history-relevant online resources, books, and publications, as well as personal trips and teaching experiences. He also includes conference and fellowship announcements.
I wish I could pick a few sample posts to entice you to visit the Northwest History Blog but as I page through the posts I find too many of them interesting (e.g.William Cannon and Revolutionary War Veterans in the American West), informative (e.g. How to Read a Book in One Hour), amusing (e.g. Gallery of 19th Century Facial Hair)
... perhaps the fact that The Cliopatria 2008 Best Individual History Blog award went to Larry Cebula says it all!
Posted by Public History Index at 12:08 PM 1 comment: 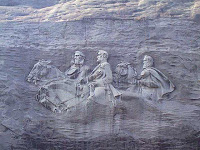 (Stone Mountain Georgia, where these solemn Confederate generals now ride again each summer night by laserlight, to the tunes of Pink Floyd)

As a southerner and student of Southern history, I couldn't let the recent decision of Robert McDonnell, governor of Virginia, to proclaim April 'Confederate History Month' slide by without note. It's been commented upon by NCPH on their Facebook page and by the NY Times (as well as other media outlets). Jon Meacham, author of the Times piece, makes a good point about McDonnell's move being part of a tradition of southern intransigence in the face of racial or social unrest (think Reconstruction, the Populist movement, and the Civil Rights movement). In this case, supporters of 'Confederate History Month' are responding to our new administration: "Whitewashing the war is one way for the right — alienated, anxious and angry about the president, health care reform and all manner of threats, mostly imaginary — to express its unease with the Age of Obama, disguising hate as heritage."

I would argue, though, that the bent on Confederate heritage hasn't really ebbed all that much during the course of the twentieth century, although it has faced growing opposition. From a public history standpoint, as Jennifer Eichstedt and Stephen Small made clear in their work on southern plantation museums, the Lost Cause myth is still alive and well, for example. McDonnell's decision seems but one iteration of a diffuse, long-standing assumption among many southern whites about (white) southern valor and rightness during and after the Civil War.

Most troubling to me is the implicit violence here. To whitewash the past is its own violence, of course, a coerced "forgetting" of the truth of slavery and oppression that cannot be separated from stories we tell about our national history. But beyond this, state-sanctioned recognition of Confederate "honor" is in danger of spurring on the growing number of hate groups in the South and elsewhere in the nation - check the Southern Poverty Law Center's "hate map" to see just how widespread these groups are. And, as exemplified by the recent attacks on black senators by Tea Party protesters, acts of violence are not limited to fringe groups.
Posted by Public History Index at 9:15 PM 2 comments: 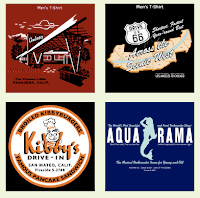 New to this year's NCPH conference book sale was the Vintage Roadside T-Shirt stand. Strategically well positioned right at the entrance to the book sale room, the colorful t-shirts featured Diners & Drive-Ins, Motel & Motor Courts, Bowling Alleys, Skating Rinks, and other authentic vintage roadsides attractions. What's cool: Kelly and Jeff, the business owners, show their enthusiasm for history not only through the unique t-shirts prints but also by supporting the preservation of these America's roadside treasures: 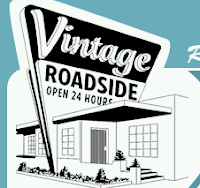 A portion of of their sales is donated to the National Trust for Historical Preservation. To check out the T-shirts and other memorabilia visit the website! http://www.vintageroadside.com/

Posted by Public History Index at 8:09 PM No comments:

Two weeks later and I'm still thinking about presentations and conversations from the annual NCPH conference, held in Portland. Mira and I tried to see separate panels to allow for more wide-ranging coverage, and both of us were at turns inspired, provoked, and vexed at what we heard (in short, exactly what we hoped for!).

My first panel on Friday (we didn't arrive until Thurs. night) was the roundtable, Promoting Community Engaging with Service Learning. I'd never heard the term 'service learning,' but it refers to "a teaching and learning strategy that integrates meaningful community service with instruction and reflection to enrich the learning exprience, teach civic responsibility, and strengthen communities" (taken from the Learn and Serve Clearinghouse). It's a missive that seems to fit neatly within goals of public history education and practice. The panel was made up of undergraduate educators - Rebecca Bailey from Northern Kentucky U., Katrine Barber from Portland State U., Denise Meringolo from U. of Maryland, Baltimore County, and Gregory Smoak from Colorado State U. - all of whom engage in service learning projects.
Posted by Public History Index at 10:18 AM No comments:


This year's NCPH conference took place in Portland, Oregon from March 10th until the 14th. Under the theme of "Currents of Change" scholars and practitioners of public history gathered to present and exchange ideas about their profession. The next few posts will report on some of the sessions and discussions to give the reader an impression of what was going at the conference.
Pretty much since the creation of the public history field, teachers and professionals have been debating the question of how to prepare public history students for their jobs outside the academy. What are the skills, experiences, and qualities that make a person a successful public historian? "Preparing the professional historian: Connecting Academic Training with the Changing Marketplace" was a title of a the "working group" composed of academics and practitioners that met on Saturday morning to explore these characteristics. Here's an overview of what's important for those who would like to try their luck as a public historian:

Surely, skills such as research, teamwork, interdisciplinary approach can be taught and trained. But what about entrepreneurship, curiosity, or willingness to work for a variety of public and clients - can we learn those in public history programs, or should we look for these qualities in students before admitting them to the programs? It would be interesting to hear from practitioners, which of these skills and trades opened for them the door to their most successful public history projects.
Posted by Public History Index at 9:36 PM No comments:

One of the permanent features that we would like to include in our blog is the introduction and a rough review of other public history and related blogs and websites: a quick and brief "who is producing what, why, and how?"

By doing that we hope to get to know other colleagues who deal with history – in what ever way, form, and shape – and to create awareness about and connections within the existing virtual community. Like a finding aid, our regular introductions, will serve as an orientation through the growing landscape of historical websites and blogs.

Of course, if you wish to introduce your own blog or website, we would be happy to post your introduction!

Who: This is the webpage page for the University of Central Florida Department of History Public History Podcasts

What: More than a blog, Public History Podcast – as the name reveals – is a collection of podcasts. Started in April 2009, the website presents new podcasts on a monthly basis. Most of the podcasts are interviews with professors, museum curators, and book authors, exploring various practices and dimension of public history.

Here a few samples from the Public History Podcast collection:

Posted by Public History Index at 2:07 PM No comments:

"...if you can digitize it, you can vaporize it"

Interesting article from Miller-McCune magazine on the threat of "unpublishing" digital resources and the general difficulties of preserving digital archives and newspapers.

Ephemeral or not, I had a great time breaking from diss. work today to explore historic tours posted on vimeo. Such a range, from institutionally sponsored tours to tourists' own take on what counts as notable and historic in any given place. I did run across award-winning vodcasts from Steve Bull, who, along with others, received NCPH's Outstanding Public History Project Award two years ago. The vodcasts were a complement to the N-Y Historical Society's Slavery in New York series.

Posted by Public History Index at 6:47 PM No comments:

Public History Index
The PH Index Blog introduces, reviews, and connects to existing public history projects and happenings across various disciplines. Our goal is to write about the limitless ways in which history is presented, used, and understood. Rather than a forum for us to hold forth, we hope to create a collaborative space in which practitioners, creators, and audience engage in dialogue and share ideas and impressions.